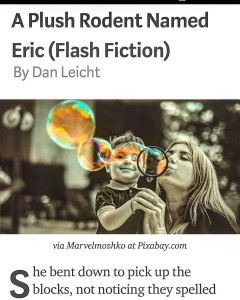 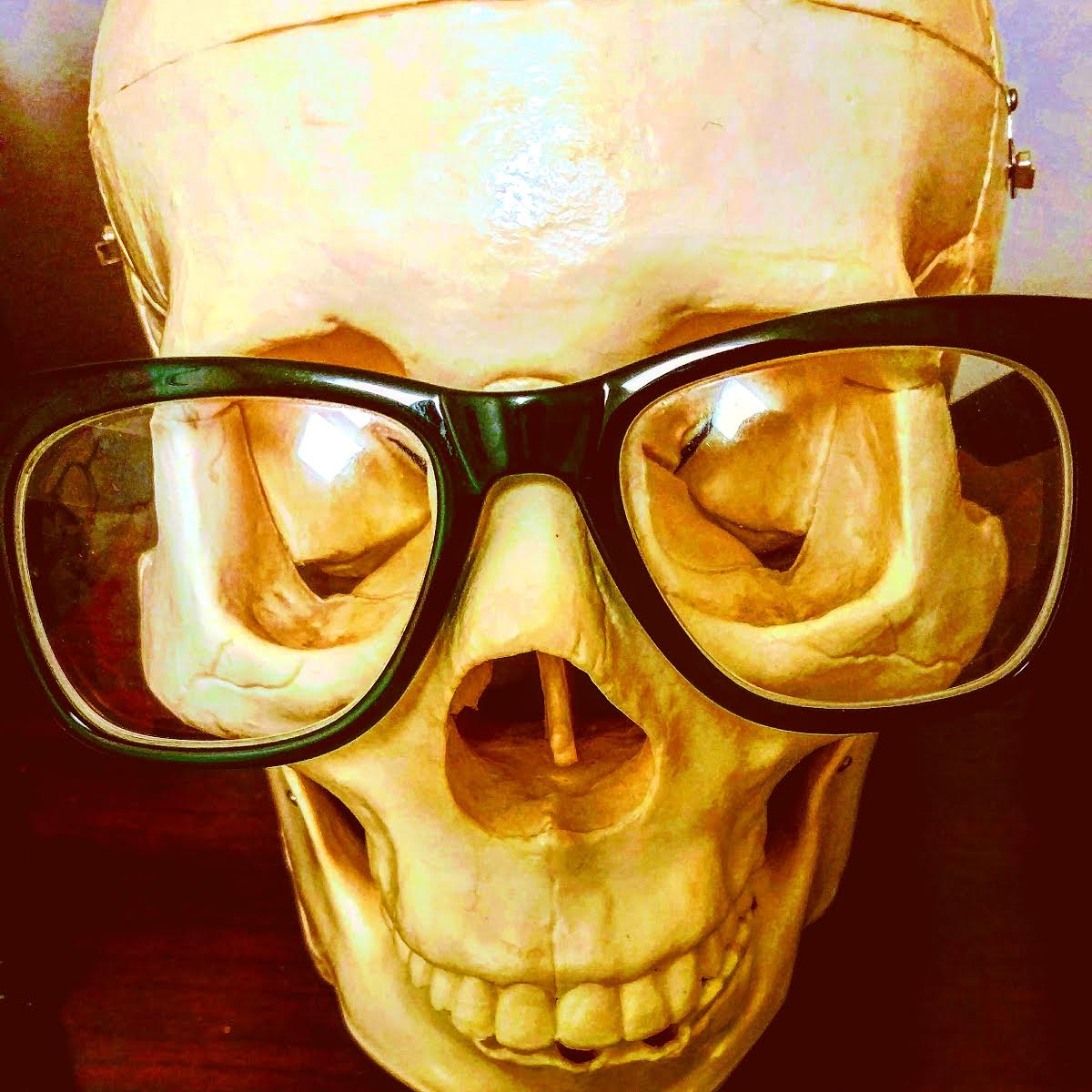 Relax it’s a replica
given to me as they were cleaning out the office of a surgeon
did it really belong to someone?
Paul is that you?
He wears my glasses as I write
at times I’ll glance at him to the left of the laptop screen
pretend he’s watching
interested in what it is I am writing “Care you hear about this line?”
I’ll ask. No reply. He keeps to himself, or is simply ignoring me.
Deep cavities stare out, jealous of the mug or can,
more often than not containing caffeine, some sort of personal buzz,
the elixir for the page,
Hemingway’s tactics aren’t for everyone,
is there anyone famous for tea yet? END_OF_DOCUMENT_TOKEN_TO_BE_REPLACED

Have A Good One – New Poetry Available @ Spillwords

Have A Good One 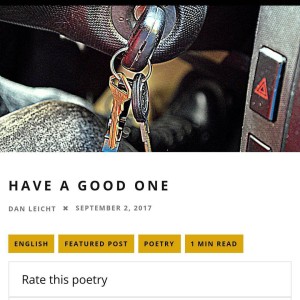 A few of my recent poems are available to read on Spillwords.com, along with a wide array of other poets as well.

A few of my most recent:

Replica of a Skull

It started out as a song,
the one that happened to play
as he made that sharp turn around exit twenty-five
on their first date. She was passing through the radio
stations not wanting to listen to a song
she’d heard before, she wanted a new experience,
something out of a fairytale to pass into her ears. Slowly
the song started, a trembling, lonesome, guitar,
frantic fingers speaking through the strings. They both became
lost and he almost missed
the exit; they were late for their dinner reservation.
He pulled the wheel to the right,
hand over fist; it felt as if the car were on two wheels;
then he pulled back the other way, straightening out
in a fear induced panic, the wheel of the car like the strings of the guitar,
slipping through his fingers yet under his total control.
It was a song that rarely ever gets played on the radio,
a song that comes only once every few years by request,
a song that sticks with you forever.

There was something eerie about the lone crate
tucked into the corner of the room. He entered
his new cramped apartment, placed his boxes down, uncertain
what might have been left for him by the previous tenant.
The crate was fitted with gold trim, bound tightly by silver screws. In
one of his boxes was a toolkit his parents had given him
years prior, he’d since used it only once before to repair a kitchen chair
he ended up throwing out before moving.
From the toolkit he removed a screwdriver –
he then slowly approached the enigma;
he imagined ominous music filling the room.
He placed his screwdriver into the first screw on the top of the waist high crate.
The screw fell to the floor with a clank. As he began to remove the last screw
something in the crate moved. He stopped,
placed his other hand firmly on the crate,
placed his ear onto the wooden lid, listened.
A heartbeat?
A slow rhythm. Faint.
He lifted the lid slightly to peek in
and noticed glowing blue eyes. The last screw fell
to the pile on the floor. He pushed the lid off.
He peered down inside. It looked back at him.
Their eyes meeting one another. His heart sank –
he stepped back – he walked forward – he took in a deep breath –
placed his hands into the crate – the scaly skin was slimy – his grip loose –
it slipped –
he picked it up again – placed it on the kitchen table.
The two were bemused by one another.
It looked back at him as if smiling.
Finally free. 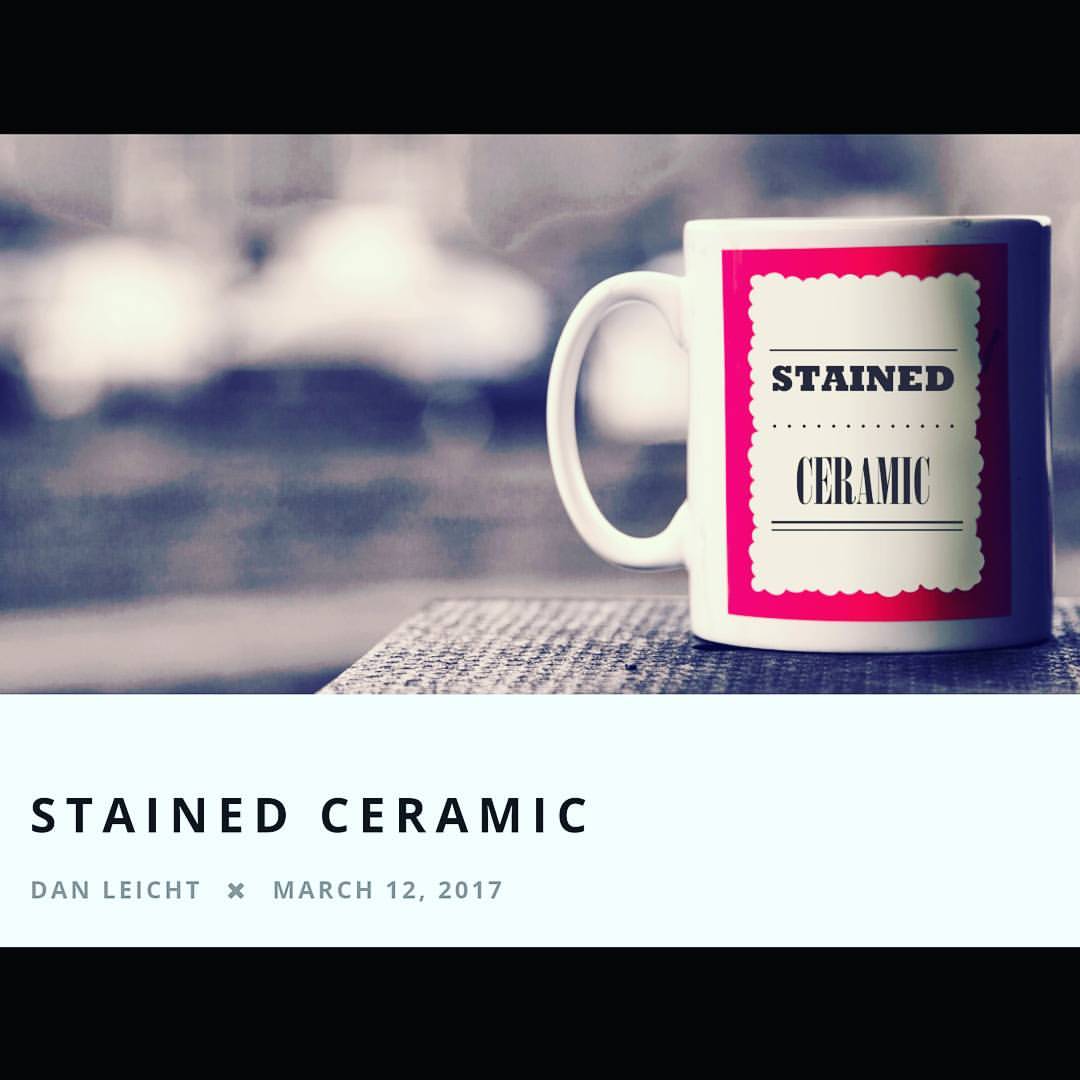 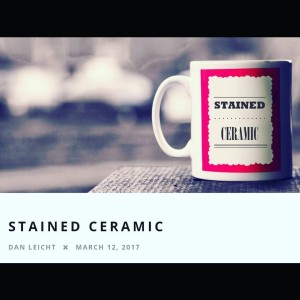 Other poems found on Spillwords:

He walked into the bookstore and took a match to the bookcase closest to the door. The first book to catch fire was written by a man who believed himself the best cook in all of South Dakota. The pages burned longer than the recipe called for, making them illegibale in the process. Marcus Silvo, the cook, would have been disappointed. His book did catch fire the rest of the shelf however, so even though his book wasn’t selling it was still having an impact.

Larry, the shopkeep with a glass eye, pulled in a long breath and let out a deep sigh. “Bonkers,” he uttered. Larry’s mother had used that word in place of swearing when he was a child and it stuck. The forty-two-year-old former car salesmen broke the glass and finagled with the fire extinguisher. By the time he figured out how to use it three firemen had broken his front door and put out the flames with a two-hundred-foot hose. The bookcase fire was put out but the floor looked like a makeshift aquarium. Larry once had a goldfish he’d won at a ring toss game at the carnival that lived five years.

Twirling the pack of matches between his fingers, whistling a tune he’d heard eight times, he felt invincible. His life prior to that moment had been nothing but homework and home cooked meals; nothing had ever happened to pull him into the next moment with enough tenacity to grab the world like a meager plaything.

“Edmund,” said his mother, he’d just entered the house and removed his shoes. “Dinner is ready.” His hands still yearning, like a man who’d just won a fistfight, eagerly grabbed at the taco ingredients placed about the table.
“I saw a peculiar story on the news just now,” said his mother, her voice bold.
“Oh yeah?” replied Edmund.
“That bookstore where Kristen works was visited by a pyromaniac.”
“Was she there when it happened?” he asked, pretending to be concerned.
“Edmund,” his mother said, her brow aimed down at her plate. “You can’t blame her for everything.”
“I don’t know what you’re talking about.” He pushed his chair away from the table and excused himself to his bedroom. Alone he sifted through a book on his desk consisting of other way he might get Kristen’s attention. While dragging his finger across each line of page sixteen he was distracted by a succession of pebbles at his window.
“Edmund! Edmund! Edmund, open the damn window!” He closed the book and lifted the wooden window frame. Standing in his backyard was Kristen in a dark blue hooded sweatshirt, torn up jeans and soccer cleats. “If you were trying to get my attention you have it now,” she said. “My mom told me about the fire at the bookstore.” Her voice was insincere, but Edmund was happy just to see her face.
“You suck,” he replied. He pushed the window down and latched it shut. 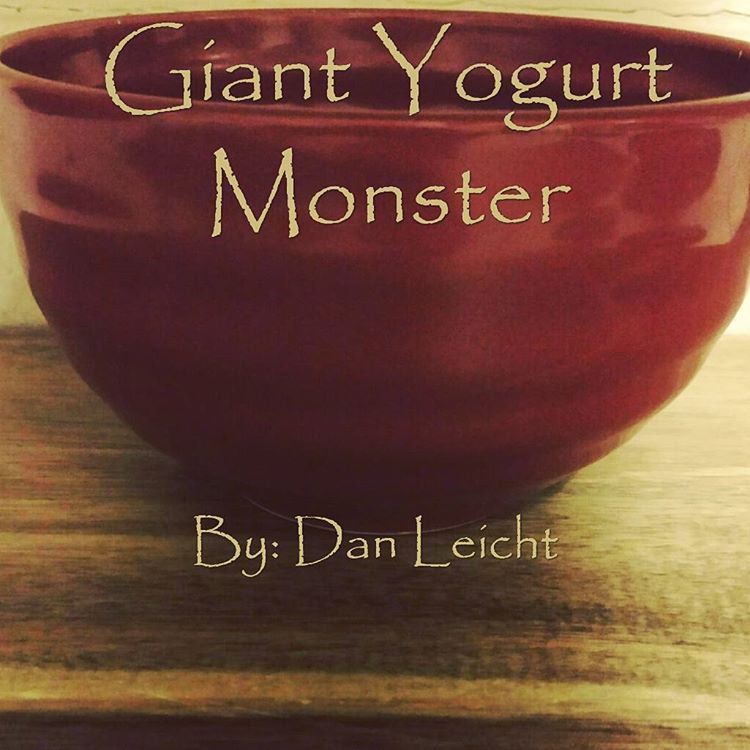 He pushed the yogurt about his plate with the underside of his spoon.
“Don’t play with your food, Jeremy,” said his mother. She was on her computer at the other end of the table, glancing up at her four year old son every few minutes. On her screen was a story she’d been working on for the past couple months.

“It’s squishy and looking at me,” he replied. He was mimicking the faces he saw in the pile of vanilla flavored goo. From across the table his mother couldn’t see the yogurt wink, or the way it reached out to shake the boy’s hand. She didn’t notice the pile of yogurt stand up on the plate, jump down from the table, and run into the living room.

“May I be excused from the table?” he asked. He was looking over his shoulder at the runny yogurt trail leading out of the kitchen.

“Sure, just place your dish in the sink,” she replied, her eyes not leaving the bright screen. She was entranced in the story of fiction she was creating, not paying attention to the one happening right in front of her. END_OF_DOCUMENT_TOKEN_TO_BE_REPLACED

It had been a shitty day. He walked into a bar after work and sat at the counter. The bartender, Riley, placed a coaster in front of him. “What’ll you have?” she asked. His fist was holding his head up as he slouched. “Whiskey sour,” he mumbled. The drink took only a few seconds to make and cost five dollars. He opened a tab and ordered several more before leaving.
It was winter and traffic was moving especially slow. He made a couple stops before finding his way home later in the evening. The first stop was to a local pet store where he bought a puppy. He didn’t need a puppy, his rent was going to increase because of the puppy, he had no idea how to train a puppy, but life had to change. Arriving home from work each day to an empty apartment was becoming dull. The second stop he made was to a gas station where he grabbed some beef jerky, a couple energy drinks, a pack of cigarettes, a lighter and filled his tank. When he arrived home he placed the puppy on the floor beside the couch and headed to the bathroom. After showering he spent the rest of the evening shampooing the stains out of the carpet made by the puppy. Thinking of a name he decided to go with Riley, seemed fitting enough since the stains took only moments to make but cost him plenty of time to get rid of. Before setting his alarm he turned his laundry basket into a makeshift bed for Riley using an old comforter. END_OF_DOCUMENT_TOKEN_TO_BE_REPLACED