I woke up to the smoke alarm going off. Never rings on pasta night, but it sure knows how to invade dreamland during the good parts. I’d have to learn French after the next night cap.

Once to my feet I made my way to the room with the couch and the screen that spits the white noise I leave on to fall asleep to on the nights the trains refuse to stop hollering past my window. The screen was on but the volume was turned real low. Someone had been in my apartment. The alarm was by the door and I could feel the heat coming from the hallway as I walked over to rip it down and stomp on it. I’ve never had good luck with apartments. Maybe I’d be better off writing in my spare time instead of chasing trouble. Then again that wouldn’t pay the bills now, would it?

The handle melts my palm, so I throw a shoulder into the door and into the lit hallway. I hear screams, others trapped. I mutter something about skipping that glass of water before bed and barrel into the door across the hall. Inside is Glenn Hardrow, an older schmuck than myself, and a sore loser at chess. I throw his comforter over him and make for the door. I can hear the sirens announcing their arrival. Chances are they’d be too late for some.

Someone dressed in black with a mask over his face comes for Hardrow. I tell him I got the old man, but there’s still some others I heard calling out for a savior. The young volunteer who missed his hockey practice takes to the stairs and saves some lives. I get Hardrow outside before my lungs become kindling. Paramedics run over and lift him onto a stretcher. They come for me but I wave them off, I didn’t even have the money for rent this month, much less the cab ride they’d give me in that white wagon.

I make my way to the nearest bar, a few bucks tucked into my shoe. I order a scotch and water. I’d finally have that glass before bed. 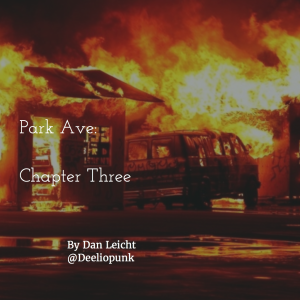