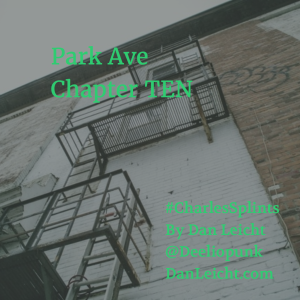 I followed him up to the next floor but he wasn’t there, it was as if he’d vanished. Only the first few doors had been opened. His search stopped at the third, but he wasn’t in the room. Crouched down like a catcher on the floor was an elderly woman. It sounded like she was eating something as I stepped towards her. Before I was even halfway across the room she turned around and stared at me with cold grey eyes, her pupils completely gone. In her hands was an arm, one just as wrinkled as her own.

“Ma’am…I can help you. Put the arm down.” She had gone feral in her demeanor. It was like watching a tiger consume it’s prey. I could feel the same bloodlust passing through me, I was craving the taste just as bad as her, but not of the same flesh. I had to find my lookalike, I had to feast. As she kept her eyes fixed on me I walked closer and began to recognize her face. She was the woman I had first visited on Park Ave, the old woman who had attacked the paperboy.

“What happened to you?” I asked. She cocked her head and squinted her eyes, snapping her neck left then right as she stared. After an intense staring contest she dropped the remains of her meal and stood up. Her fists began to grow larger, stubble formed on her chin, her hair turned black.

“Get out!” a gruff voice demanded. The transformed brute ran towards me, without giving it any thought I made a dash towards him too. We met in the middle of the room and locked our hands together in an effort to overpower the other.

“Get out!” he repeated. He was beginning to force me back when I heard footsteps come from behind me. The shapeshifter shifted his glance from my face to another’s moments before being struck with a wooden chair and sent to the ground. His grip still tight on my hands I fell down with him, only to be helped up by a familiar face.

“Don’t bite. I’ve had enough of that today,” said the lookalike I’d been following. I couldn’t stop myself from lunging at him, wanting nothing more than to rip flesh from his exposed forearm. With the leg from the chair still in his hand he struck me and sent me to the floor.

I awoke with a slap to my face. I found myself bound to a chair with tourniquets tight around my wrists and ankles.

“You tried to bite me, told you not to do that. You didn’t give me a whole lot of choices.”

“What is it you want from me?”

“About what you shapeshifters are doing here, what you want. The endgame.”

“Yeah, because I eat flesh for breakfast, helps with the blood pressure.”

“I must’ve been injected with something to make me do that. That wasn’t me.”

“Wasn’t me either. So looks like we have more in common than just my face. Also seems like you think you’re me, could use a hand on this case, so you’re hired.”

“Being wrong isn’t usually my thing, unless it’s picking a hobby. Turns out I should’ve retired from this gig years ago. I have been finding out quite a bit on you guys though, so at least I’m getting somewhere. Looks like you take a bit from a host, the source material if you will, and in doing that it gives you their appearance and a bit of their memories. Looks like you’ve been busy too, taking on this case, visiting some of the same places I have. Visited one of my favorite spots on Alexander recently, turns out the bartender thought we had a conversation I don’t remember having. I’m guessing that was you he met with.”

“None of this is making sense…”

“It all makes sense, you just don’t want to believe it yourself. You’re a shapeshifter just like the rest of them.”

2 Charles Splints Stories Available FREE On Both Wattpad And Smashwords!