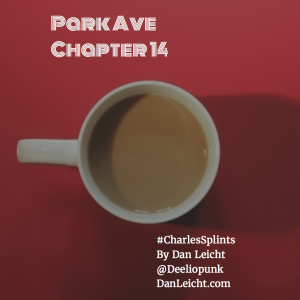 In just a day the streets had become barren. The real Splints figured it was because we had found out about the shapeshifters, perhaps sending them into a panic. We stopped at the bar on Alexander for a morning cocktail only to find the door was locked.

“Barkeep usually opens this place early for the folks who work the night shifts at the hospital. Gives them somewhere to go, and me somewhere to feel like the world wants us to forget all our troubles, no matter the time of day.” He walked around to the back of the building, with me once again following. It felt strange for me to be following someone else so closely on a case I felt so confidently before to have a grasp on. The realization I was just another imposter triggered something in me, a cowardice almost, a fear of the unknown. I latched onto his bravery, like a child to their parents. In a world where I once felt in control I was finding myself powerless.

“What are you looking at now?” he asked me. He was standing there holding the backdoor to the bar open as I stood there staring up at the sky.

We both headed inside and closed the door behind us. I locked it while he poured a couple glasses of single malt.

“I’ll have mine on the rocks,” I told him after closing the door and heading towards the bar counter.

“You don’t water down the good stuff.” He slid me my glass and took a sip of his. “We’re becoming less alike. You’re noticing it too I bet.”

“You may look like me, know some of my memories, but you’re not the real deal. You flinch all too often when faced with obstacles, and you water down the top shelf at a bar. I would never do either of those things. You’re degenerating.”

“That’s not possible. I feel fine,” I said before taking a sip of the scotch and wincing at the taste.

“Even at eighteen I didn’t let the world see me wince at the taste of a glass. Sometimes you have to pretend to be the man you want until it becomes your daily attitude.”

“Take a writer for example. Does it sound fun to willingly give yourself homework? To shut the world out for hours on end, sipping black coffee while staring into a bright screen in a dark room? Most people would say that sounds like a waste of life, they’d rather be out seeing the world, but to the writer a day without a paragraph is a day wasted. They taught themselves to love that silence, that life. Just like I taught myself to become who I am today. You shapeshifters are trying your best, i’ll admit that, but you’re not reaching the total human potential. Whatever you’re true form is, it’s not truly capable of the human experience. We learn, adapt, and create personas that make us truly happy.”

“You got all that from the request for some ice in a glass?”

“I’m in this business because I’m good at it,” he said as he poured himself another.

We left the bar and headed back out to the barren streets.

“Where do you think everyone is?” I asked him. I felt jittery and pulled the vial from my coat to take a sip.

He took a pull from his flask filled with coffee. “That’s odd.” He replaced his flask and started to follow a stray cat heading down the street.

“That cat looks familiar,” I said aloud as I followed closely. The cat appeared as if limping with each step.

“Doesn’t look familiar to me. Rarely ever see a cat that golden and clean roaming these streets.”

“Hardrow! That’s the cat Glenn Hardrow turned into!” Once I shouted I realized my mistake. The cat overheard me and began to run away from us. Splints gave chase to the feline, showcasing agility I didn’t think possible for him. My legs began to tremble as I followed. I could feel them changing with every stride. Once catching the cat in a dead end we both took a break to catch our breath. I could hear Splints breathing heavily, but my own breathing seemed much smoother. He turned around to look at me and his eyes widened.

PARK AVE Will Be A 4 Part Series!