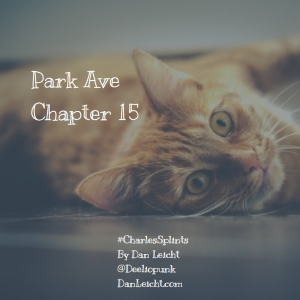 “What is it?” I asked. I couldn’t see myself, but admittedly felt stronger than before.

“You look like me from about twenty years ago. The jacket doesn’t even fit you right anymore.”

“It must be the vial,” I said before taking another sip.

“The fountain of youth was in me all along. That’s something for the movies, write that down.”

Hardrow was trying to sneak by us but was stopped as Splints stuck a boot out and blocked him. The cat looked up and gave a whimpering face, much like that of a child. Though the eyes of a cat they looked hauntingly human as he stared up at us.

“Not so fast, buddy. Care for a game of chess?” he said as he knelt down. I was still marveling at how I’d managed to become a younger version of my human host. Where other shapeshifters had gone mad in their transformations, I had been able to make mine even stronger. At the time I assumed it was my bond with Splints that had been the cause.

“Charlie, come here and pick up this cat.” I walked over to the cat and knelt down.

“Like hell he will,” said the cat as he began to transform back into Glenn. He seemed a lot more composed in his attitude than when I had last seen him. He stood up and dusted off his sleeves, hacked a hairball to the ground in an effort to clear his throat.

“I thought it was gross when you’d spit up those horse pills you have to take,” said Splints as he stepped away from the wad of hair.

Glenn explained to us how he revisited the real Glenn Hardrow in order to get another taste of blood, but assured us he hadn’t eaten him yet; he wasn’t even sure if he could. He admitted to feeling deranged when he leapt from the hospital window, but felt calmed when he visited the real Hardrow again where he’d hidden him. He said Hardrow understood the need for his blood in order to survive, and even gave it willingly much like Splints had done for me.

“If you’re so calm now, then why run?” asked Splints.

“You were chasing me. What other choice did I have? I didn’t leave in the best manner at the hospital. I wasn’t sure what you two would do if you caught me. I’m still not sure what you’ll do,” he said while taking a few steps backward in caution.

“Take us to Glenn. The real Glenn,” asked Splints. He was tipping the flask straight up in the air in an effort to get the last drop out of it. “Hope there’s coffee where you put him.”

“Whoa, this is pretty ritzy,” said Splints as we walked into the penthouse suite of the Brookhouse Resort. He made his way to the kitchen and began prepping a pot of coffee as I followed Glenn’s lookalike.

The carpet was a bright white once stepping into the suite. The couches and curtains just as clean, air like fresh linen. In the master bedroom however, where the real Glenn was being kept, the carpet was covered in deep red stains. The desk chair was broken into pieces, glass shards dug into the sole of one of my shoes.

“He’s not here. But now that we have you alone…”

The lookalike opened the door to the bathroom and four more Glenns walked out, all of which looked drained.

“We’ve run out of our host. We’ve successfully become Mr. Hardrow. You’re going to help us take out Charles Splints.”

For more Charles Splints see below! More stories are available on Kindle. Parts 1 and 2 to the Park Ave series are both available for FREE on Smashwords and Wattpad.