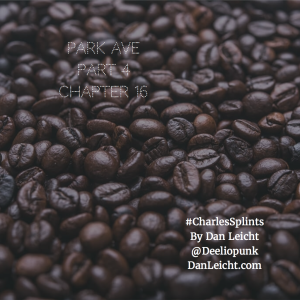 What they were asking me seemed ridiculous. Within my time spent with the real Splints I’d become attached, almost as if a friend. They told me the real reason we were all here on this planet, in this city. It was a worldwide takeover. Brooksend was the first city to be overrun and it’s been happening for months. The initial idea was to do things slowly so nobody knew what was going on, but Splints had ruined the timetable by finding out. If he got word out to anyone the entire mission could be compromised. The Glenn host, the one who showed us into the suite, had told me our own planet was dying, that earth was our best bet at survival.
“You’ve seen it haven’t you?”
“Seen what?” I asked. I was pacing around the room trying to get a hold on myself. My palms were beginning to sweat, my forehead too. The one Glenn was trying to reason with me, but it was clear the other four were skeptical of me.
“Our ship. Up in the sky.”
I remembered seeing something up in the sky before entering the bar on Alexander St. It distorted the clouds a bit, the ship’s camouflage no doubt. Splints had ushered me into the bar before I could make sense of it.
“I’ve seen it, yes.”
“Good. That’s the only ship we could get through the atmosphere, there are others in waiting outside the planet. Now, about Charles Splints. What’s our best method at taking him out? We’ve gotten reports of his exploits across the city and are aware even with amount of us in this room that we are outnumbered. Is there a weakness of his we can exploit?”
“I don’t know,” I answered. I was trying to compose myself as I sat on the edge of the bed and dragged my fingers through my hair.
“What have you learned about him in your time together? What have his memories taught you?”
“He’s a good man. He’s trying to save this city as a one man army and he’s doing a hell of a job.”
“Those sound like words of praise, surely nothing that can help us,” said one of the shapeshifters still leaning in the bathroom doorway.
“He wouldn’t cross us,” assured the first Glenn copy.
“We can take him out,” I said while getting back to my feet. “It won’t be hard, but we can’t do it here. It has to be somewhere he’s not familiar with. I won’t be able to take all of you with me either, only a couple, as to not arouse suspicions.”
“Certainly. Take your pick.”

Myself, along with the original Glenn copy, and the skeptical one from the doorway, walked back out into the living area of the penthouse. The real Splints was there taking large gulps of black coffee from an oversized mug. His eyes watched us as we moved across the room. Whenever he’s even a little bit suspicious he’ll squint his eyes a bit. I was waiting for that squint before telling him next course of action.
“Hows the real Glenn doing? Tell him i’m up for a game when he is.”
“He’s not here,” I replied. I took an apple from the counter and took a nervous bite. “He’s being kept somewhere else, one of the other Glenn’s moved him. It’s not safe here.” Charles nodded as if to agree and refilled his flask before heading for the door.
“Let’s get going to this new location then. Shall we?” he said followed by a sip from his flask of columbian blend.