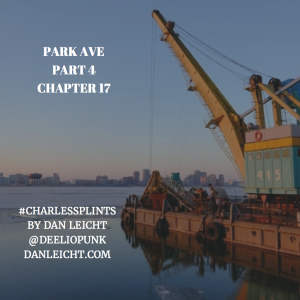 We all got into a beat up sedan like a bunch of clowns. Splints stepped on the gas like he’d pissed off a mob boss. We were headed to the docks. My memories of Splints prior adventures lead me to believe he’d be familiar with the area due to his time spent solving the case on East Ave. During the drive Splints turned the radio up loudly, blasting classic rock out the windows into the cool air. The two Glenn lookalikes in the car clearly weren’t enjoying the music regarded as timeless by earth standards.

All of the talk about the mothership and survival of our race from earlier was obviously overbearing. I found myself trying to put the pieces together, wondering how all of it seemed so new to me. Was I not truly one of them? Had I somehow lost my prior memories? I thought back to the other shapeshifters, the ones from the hospital who had also become Splints. What had driven them so mad? I was able to keep my composure…or at least it seemed that way until Splints found me and had given me the vial. In spending time with him though I was finding myself taking fewer sips from the vial.

We arrived at the docks and all exited the car. The two Glenns both looked at me and smirked, as if we were all secretly leading Splints into a trap devised much earlier. As we made our way along the docks we saw a man staggering towards us. At first his stagger resembled that of the shapeshifters from the hospital, the ones Splints and I had to fight our way through. This was different though, he seemed to be in true pain, a pain I had never felt before. Splints walked over to him and put the mans arm over his right shoulder. He carried the man to a nearby bench and sat him down. It was there I saw Splints true capabilities, something I knew we had not yet discovered here. He sat with the ailing man and listened to him. He asked the man about his life, how he came to be here, where he was headed. I walked over and joined them and the two Glenns looked on. They snickered to one another, perhaps devising a plan of their own.

“The hospital in this city is a ghost town,” said Splints to the man.
“It’s just as well,” he replied. “I wouldn’t make it there anyhow.” The man’s eyelids kept shutting and then springing back up, as if the man was trying to stay awake.
“We’ll both stay with you,” said Splints.
“Is this your son?” asked the man.
“Something like that,” I said with a chuckle.

The man leaned against Splints’ shoulder and closed his eyes a final time.