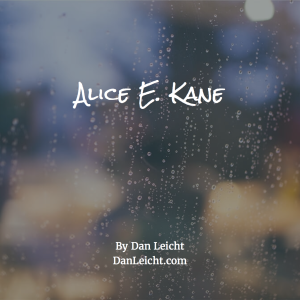 “Two ducks walk into a bar. The first orders two glasses of water. The second pays the bill.”

“Get off the stage!”

“My grandmother has better material than that!”

“Well your grandmother sounds like a woman of immense talent. Mind if I asked her name?”

Glenn was booed off the stage. In the dressing room he asked Rain Davis for his night’s pay. Davis, the owner of The Laughing Falcon, told Glenn to go look for his money in the pond out back. Glenn’s jokes were always hit or miss with the crowd, but since his breakup with Alice it was clear he wasn’t in the game anymore. When he sat down to write he couldn’t think of the words like he used to, couldn’t light the match and burn the ink anymore.

Back at his apartment Glenn poured a glass of water and stared at the irony, his little pond. He couldn’t afford a shot to splash into it. It took him three hours to fall asleep that night.

The next night Glenn didn’t bother showing up to the club. Davis rang him ten times at his landlord’s number, but Glenn was far from home by then. He had spent the day driving for miles, hours, and had found himself in a motel that accepted checks. He knew it would bounce, but they wouldn’t know that until the day after when the bank reopened. That night, instead of telling his old jokes, he sat on a bed with busted box springs, the same one a newlywed couple had stayed in the night before, and he wrote. He’d brought a new composition notebook he’d found for a dollar and filled it front to back, even wrote on the cardboard covers, carving words into the periodic table.

Davis had been able to track Glenn down, because he knew that no matter how far Glenn traveled he’d always leave a clue to his location for Alice. Just in case she’d decide to meet him there.

“She’s in the car, Hardrow! Waiting for you to explain to me why you bailed last night. I’d rather have your trainwreck of an act than an open hour and the bar covered in angry boozers and not the stage.”

Glenn couldn’t resist the allure of seeing Alice again, so he opened the door and was met with a fist to the face. When he awoke from his pain enduced nap he was in the trunk of Davis’ car. He could hear Davis shouting from the driver’s seat, telling him Alice was being held in the back dressing room of The Laughing Falcon, being fed handfuls of peanuts every hour or so by the dishwasher Rudy. Rudy only got the job because he made his own dish soap, and because he shared a mother with Davis. When the trunk opened back up Glenn was pulled from the car and into the street.

“Tell me a joke, Hardrow. Something new, please.” Davis pulled Glenn up by his arm and dragged him to the front door of the club.

“She’s waiting for you to take the stage.”

“The stage isn’t calling me tonight, Rainy.” Glenn composed himself and sunk a ball of knuckles into the gut of the club owner. He threw a shoulder into the door and knocked over a couple tables on his way to the stage and into the back dressing room. There he found Alice sitting in front of the only mirror looking back at him in the reflection. He was in tattered clothes with a black eye matching the sleepless bag resting under his other hazel.

“Alice, are you all right?”

“He’s said all I need to hear. Your act is out and mine is in. I’m no failed comic, but I can still dance.”

“I thought he had hurt you. I came here to…”

“I don’t need rescuing. I’ve never needed rescuing, Glenn. If you need a damsel go find another girl. I’m here to pay the rent, not get kicked out at the end of every month like you.”

Davis had appeared behind Glenn with a couple friends by his side. Together the three of them made sure the comic wouldn’t want to come back for an encore. Glenn was thrown into the street with everything in his pockets stripped for lost profits from the night before, but he didn’t have more than five bucks and a few pieces of gum. With a busted lip, one eye open and a stagger in his step, Glenn walked to the nearest grocery store three blocks away. He stood outside until he begged for enough money to buy a milk. He used the money to buy a lottery ticket instead and won twenty thousand dollars. He moved to Nevada and paid rent until he could afford to write better material.