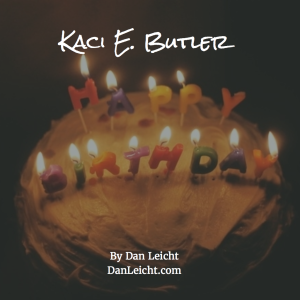 On her third birthday he bought her a small piano. It was the kind with only a few keys, each of them a different color of the rainbow. On her fourth birthday she wished for a new piano when she blew out the candles. Santa gave her one that Christmas and she practiced everyday by watching videos on the internet. On her fifth birthday she played her first concert in the living room of her grandmother’s house in front of a crowd of twenty members of her family. He could tell she was nervous, but when she looked up and saw him smiling back at her she knew she could do it. After that it became a tradition for her to play every year on her birthday for her family. At age eight she was craving a bigger crowd and a grander stage.

“Mrs. B will be here soon, Kaci. You can finish your homework after your lesson,” he said as he peered into her bedroom. She was hunched over her desk trying to figure out how many apples Greg had in a math problem. She didn’t care much for Greg’s problems. Math was never something that held her interest, so she constantly struggled. She loved when Mrs. B came though because that meant she got to practice the piano and learn something new. Today she was finally going to try Beethoven. She’d been listening to him everyday on the bus ride to school, she didn’t care much to talk to the other kids on the bus, only her music seemed to matter.

“On my way!” he said after hearing the doorbell ring. He rushed down the steps and pulled the door open. Mrs. B walked in and shook his hand. She was older than him by twenty years and would of had gray hair if she didn’t color it every week. She liked to keep it a shade of red bordering on brunette. She was wearing a light grey dress that went past her knees. Her heels made her look taller than she actually was, but he was still a few inches taller than her at 5’9.

“I’m here!” said Kaci as she skipped every other step on her way down the stairs.

“Excited! I’ve been listening to Beethoven for weeks!”

“Well we’d better get started then. Thomas, you can come listen if you’d like.”

“I’ll be over in a bit. I’ll let you both get started. I’d better start preparing dinner and get it in the oven.”

Each of Kaci’s lessons lasted only one hour, but she’d always plead for a few more minutes with Mrs.B, who didn’t seem to ever mind. Mrs. B had been playing ever since she was a little girl, but she hadn’t started until the age of ten, unlike Kaci who first started tapping the keys at the age of three. During her lesson Kaci couldn’t help but smile as she would listen to Mrs. B play and then mimic her right afterwards. It didn’t take long for Kaci to pick up on the song and start playing all by herself. It was during the the 5th Symphony when Thomas finally came out of the kitchen and headed over to the piano in the front room. He stood behind them as Kaci played, tears beginning to swell in his eyes. If only her mother could see this he thought. It was on Kaci’s second birthday, he’d forgotten to pick up a cake from the store and guests would be there in less than an hour. She got in the car and drove to the supermarket, but never made it home. By the time everyone got there in was already on the news. People came in to see Kaci on her big day, but were met with the devastating images of a car crash involving five vehicles and four casualties.

“Dad, come listen!” shouted Kaci. She hadn’t realized her was already there with the biggest smile on his face.