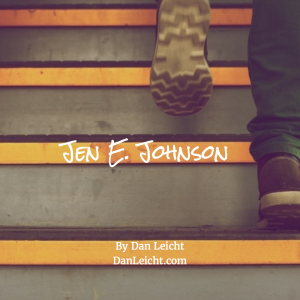 She watched as he approached the step leading to the kitchen from the family room. To her it was never a thought, a quick raise of a foot and before she knew it the other was over too. For him though, at the age of two, it looked like Everest. He grabbed the top of the step and heaved one leg over before rolling his entire body over and onto the tiled kitchen floor. Once in the kitchen he began to run frantically around the house shouting in shear joy. To her it just looked like madness, but in his eyes he was hundreds of feet tall, leaping over his toy cars like a giant rampaging through a town. She picked him up and put him in his high chair at the table.

“Eat so you can grow big and strong,” she whispered from beside him. He never liked to eat anything other than popsicles. “Jack, please, you need to eat. Will you eat a little bit?” He smirked and shoved a handful of mashed potatoes into his mouth. He kept chewing it as if he’d grabbed a handful of gum instead. “Jack…” He smirked again and opened his mouth, the potatoes oozed out and back onto his plate. After an hour of eating his meal piece by piece she got him ready for bed.

The next morning he woke her up by screaming her name at the top of his lungs.

She woke up, seven in the morning on a Saturday, and looked out the window at the driveway. There he was waiting with his car door open and tapping his watch with his finger. Every other weekend her ex-husband Chaz would pick Jack up, a day late, and take him to his apartment for the rest of the day, returning him late Sunday night when she should be sleeping. She opened her window and shouted down to him before walking over to Jack’s room and getting him ready to head over to his father’s.

“Jack, time to get up. Your daddy is here.” Jack rubbed his eyes and shooed her away so he could get more sleep. She slung his overnight bag over her shoulder and picked him up in her arms.

“Make sure he gets some breakfast when he wakes up,” she said as she strapped Jack into his carseat.

“I know, I know. Here’s a few bucks, get yourself a massage today or something,” said Chaz as he handed her a five dollar bill.

“That’s so sweet of you,” she responded sarcastically.

“See you around ten tomorrow night.”

“Could you maybe get here a bit earlier?”

“Maybe. I wouldn’t count on it though.”

As he drove off she walked slowly back into the house. From the kitchen she walked to the family room to turn on the television. On the way she had forgotten about the step and almost fell face first into the carpet, but caught herself at the last second.