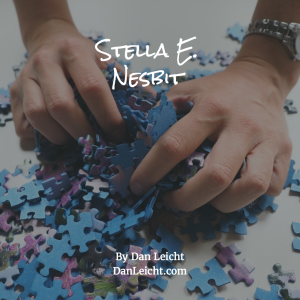 She’d been working on the puzzle for months, unaware that a few of the pieces were missing. Every day after lunch she’d head to her room and sit in her favorite chair, pull up close to the table and stare down at the array of sky colored pieces. A couple hours before dinner time Janis would knock on her door to ask what she’d like to eat. She ordered the same dinner every day, always mashed potatoes with butter, no gravy, with a side of steamed green peppers.

“Same as before. Same as always,” muttered Stella to herself as she was looking around desperately for the next piece to her puzzle.

Janis opened the door and stood beside Stella at the table.

“Why don’t you ever bring anyone else in here to help you with this puzzle? There’s plenty of others here who’d love to try a tough puzzle like this one.”

“There’s no one here I know. Don’t know a single person here.”

Janis patted Stella on the shoulder and closed the door behind herself. Alone in her room she got up from her chair and walked over to the radio to turn on Henry’s favorite station. Henry was her late husband who passed in the late 90’s. He was a mechanic who owned his own shop, he’d opened in when he was still in his twenties. From the money he was making when it first opened Stella didn’t have to work. As time passed though the shop began to get less and less work. After thirty years in business he had to close the shop. The two took a dive and opened up there own crafting business. While Henry had been at work all those years Stella had filled there basement with a vast collection of homemade goods. More than enough to get their business started. The business was a success, but Stella wasn’t able to keep it up by herself when her husband passed away. The money she got from selling the business got her into Glisdale Nursing Home.

Janis knocked on the door a little after six with Stella’s dinner. From the other side of the door she could hear the country music playing on the radio. Janis knocked again.

“Stella? Stella, are you still in there?” Janis opened the door slowly, as to not startle Stella if she was still at the table working on her puzzle. Stella was no longer at the table however, instead she was in her bed. Janis noticed the grin on Stella’s face as she walked over. “Stella? Your dinner is here, I’m going to leave it on the table for you. Stella?”

Janis placed the dinner on the table beside the puzzle and wiped her eyes.