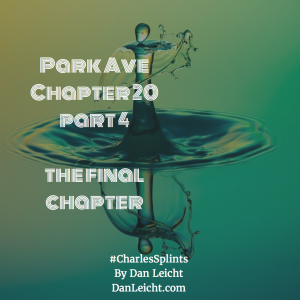 We entered into the pitch black building. The door handle was locked, but Splints repeatedly slammed his shoulder into it until he made it through.

“I have an idea, something we should say if we’re able to contact the mothership.”

After making our way through the first floor we traveled up the stairs to patrol the second, then the third, eventually making our way up to the tenth. While the other floors were empty we could hear the tenth bustling with activity as we made our way up from the ninth floor through the stairwell. We could hear the the feet of dozens of dobbleganers going up and down the hallway. I wasn’t sure what we were going to have to do in order to get through, but I new Splints had an idea. I tried to concentrate and think like him to see if I could match wits with the city’s best.

“We’re going to charge in there and run like hell,” he said.

“I’m too big for that, but your a few years behind at this point. That’s not a bad idea for you, would also give us a bit more range in our search. I’ll provide the distraction. You make contact with the ship and tell them your message.”

“But what about you? You’ll be swarmed,”

“Once they hear your message they’ll know i’m not the enemy.”

We nodded and parted ways. There was a way up into the vents from the stairwell that Splints helped me into. I started crawling as fast as I could, trying to make good time, as he opened the door and began to raise hell. I could hear him landing punches as I made my way through the cool metal vents. Not only was he fighting for his life, but he was also shouting as loud as he could, which caused the others to shout, all of which shrouded the sounds of be barreling through the noisy vents above them. After traveling most of the tenth floor I found what looked like a central brain for those on earth to communicate with those above. The room was complete with wall-to-wall computers and wires stretched out all over the floor. In the center of the room was a glowing white pillar which allowed the earth technology to reach the mothership. With a balled up fist, just as the real Splints does, I slammed down into the cover under my knees and dropped down into the room. Doppelgängers with looks of bewilderment jumped from their seats. Some of them were holding weapons and wasted no time in taking aim at me as I got up and began to assure them that everything was all right.

“There’s no reason for alarm. I’ve come with information that can help us all, we don’t need to exterminate the life on this planet,” I said with my hands out in front of me. “We can live richer lives if we joined the people of this planet. I’ve been alongside my host all day and have not gone insane. Living alongside our hosts can give us just as much nourishment as eliminating them, even more actually. I started out as an exact image of my host, but in time I began to become younger, stronger.” They all looked at me as I was telling them their lives were all lies. They heard the conviction in my voice and lowered their weapons. One of them pointed to the main communication to the ship before stepping aside. I told the same speech to the mothership and was assured there was no other way, that there were too many of my species to be able to co-exist with the humans. “WE DON’T HAVE TO CHOOSE THIS PLANET!”

Following my outburst there shot down a beam of light into the room. Behind me stood two of the elders from the mothership, their tentacles dripping on the floor as they moved towards me. There eyes glared a deep purple, signifying their hierarchy. The rest of our race has light green eyes. A special injection being the cause for the mutation. Their speech was of our home planet, sounding of gargling babble compared to the speech of the earthlings i’ve encountered and learned from. I listened to what they had to say, but ultimately did not agree. We’ve see the other planets in this galaxy and this was only the first of many similar planets we’ve visited. There was room for our species to spread throughout the galaxy, live peacefully on the many different planets without having to take over a single one by destroying all the life on it. They conversed with each other, spitting and slobbering out the speech of our race. They turned to me and agreed with my plans. They would place more of our kind about the planet, but assured me they would abide by the rules I explained, believing me that living amongst the humans and learning the true human experience was a better way to thrive within this world. In a beam of light they returned to the mothership and were able to transmit the message to all those in Brooksend.

I walked out into the hallway to see Splints surrounded by knocked out bodies as he took a sip from his flask.

“It work?” he said as he placed the flask back into his coat.

As we exited the building and made our way back onto Park Ave I removed a vile from my pocket.

“You still need my blood?” he asked.

“Not yours, there’s only room enough for one Charles Splints in Brooksend.”

“Then where’d you get that from?”

“That man we met at the docks.” I took a deep breath, exhaled, and then a sip. My body began to pulse and my face began to change. I no longer looked like the great detective Charles Splints as I pulled up the collar on my jacket and waved goodbye to the great detective.

You can grab Part 4 to the Park Ave series FREE on Smashwords!