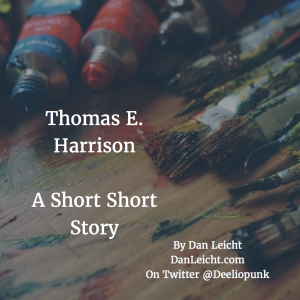 She took her first steps off the bus and rushed straight into his arms. They had dated years before and found themselves going down different paths in life, but when he reached out to her through letters she knew he was still the one. Her husband, Henry, couldn’t know what she was truly up to, he’d do anything to win her back and she knew it would be best to leave him be. The thought of him realizing she wouldn’t be coming back crushed her, but there was something she had to know. She had to know if Thomas was truly meant to be the one. She had to give it one more shot.

“Jessica, my dear, you look beautiful,” said Thomas as they embraced each other. The bus drove off and he picked up her things for her, jokingly complaining the weight of her bags would take out his back.

Thomas had moved on just as she had. He married, had children, and he divorced. His children by now were all grown up though, each of them in their late forties. He was proud of all of them even though they rarely contacted him anymore. After the divorce was finally over his children sided with their mother over him and he lost contact. Every few years one of them would remember his birthday and send a card in the mail but that was it. He looked forward to those cards more than they could ever know.

“Just this way,” he excitedly said as they approached his front door. He placed her bags down while he fumbled around with his keys. “You’ll love it inside, lots of paintings. I remember how much you loved to paint. Do you still?”

“Not in years, Thomas,” she said a bit embarrassed he had remembered. She had gone to art school but dropped out when Henry had lost his job at the dealership. She got a job working at a dry cleaner’s during the day, and a diner at night. Henry eventually found another job selling furniture, but she never went back to school, the will to paint just seemed to drain from her during those long days.

“Thomas, it’s so beautiful in here.” She walked into the house and looked around at all of the wonderful paintings he had placed about the walls. There was even a mural done all along the wall where the couch was that faced the TV.

“I knew you’d like it,” he said with a profound delight in his voice.

“I don’t think i’d ever want to leave this enchanting room,” she said as she sinked into the leather couch.

“You won’t ever have to,” he replied with a smile, “unless of course you need to use the bathroom. It’s down past the kitchen over there.”

She couldn’t help herself but laugh at his corny jokes. She laughed more the first few days there than she had in years. Eventually weeks went by, and then months, and soon she forgot about what Henry might be thinking. She was having the time of her life. After three months, right around Christmas, she bought some art supplies from a nearby craft store and setup a studio in one of the spare rooms. Soon the room was full of her paintings. Thomas helped her by learning how to mat and frame them as to show them off in the most elegant way.

In the spring they attended art shows and her paintings would sell out each time.

“What do you think this all means, Thomas?” she asked him one day during their drive home from a show.

“What does what mean?” he replied.

“This, what we’re doing. My art. I feel like it was destiny or something that we ended up back together.”

“I think you’re right,” he said as he looked over at her, a tear in his eye. He looked back out towards the road and wondered what his life would be like if he hadn’t sent that first letter.