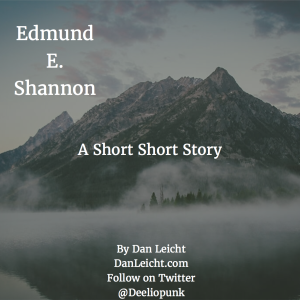 “She never listens to me,” whispered Edmund to his stuffed bear once his mother left the room. For the fourth night in a row he tried to convince his mother that math homework was pointless, especially long division.

“Finish your homework and you can watch your shows,” said his mother, her voice trailing as she walked back downstairs. Edmund rolled his eyes and looked down at the sheet of paper covered in ridiculous shopping lists.

Instead of focusing on his homework Edmund let his mind drift off. He began to draw cartoons in the side margins of the paper. Whenever he finished a drawing he’d stop and show it to his stuffed bear, they’d both laugh and he would quickly get started on another. After an hour passed his mother knocked on the door again.

Edmund panicked and looked over at his stuffed friend for advice. His bear shrugged. He imagined the characters he had drawn coming to life and answering his mother for him. First, the cowboy he drew leapt from the page, followed by the stealthy samurai. The cowboy walked slowly over to the door, his gun up up behind his ear as he held it with both hands. The samurai stood in a fighting stance, ready to strike if whatever was on the other side of the door posed a threat.

“Who goes there?” asked the cowboy.

“Edmund? Why are you talking like that? Open this door,” asked his mother. Edmund had placed his pogo stick under the door handle to jam the door closed.

“Quick, Edmund, you must hide before the beast breaks through the barrier,” warned the samurai. Edmund nodded and crawled under his bed. He kept his stuffed bear atop the bed as a look out.

“Edmund, this isn’t funny. Open this door and let me see your homework.”

Knowing his room wouldn’t be safe much longer the samurai threw a smoke pellet at the floor and grabbed all three of them before escaping.

“Where are we?” asked Edmund as he looked around in bewilderment. He walked over to the room’s only window and looked out to find himself in a far away land. There was mountains covered in white daises as far as he could see. “What’s that?” asked Edmund. He was pointing to the top of one of the mountains at what looked like a small house made of stone.

“That’s where the wizard lives,” answered the samurai. “He is wise in all things. Do you wish to meet him?”

“Yes! Can we go please?” The samurai looked over to the cowboy and the stuffed bear. They all agreed to accompany the boy on the journey.

Before leaving they packed a bag with supplies, including scotch tape, gummy worms, crayons and paper. Without anyone seeing him Edmund stuffed his math homework into the bag. The journey took them what felt likes days as they traversed through the mountains. Edmund had to pick up his stuffed bear repeatedly as it kept falling behind to pick flowers. They eventually reached the small house of stone and the samurai motioned for the young boy to knock on the door. “You do it,” said Edmund timidly. The samurai rolled his eyes and knocked on the door.The door opened slowly, but no one was on the other side. The four of them stepped in and looked around. Inside the little house was massive, certainly big enough for a giant to live in. A booming voice came from above.

“What is it you seek?” asked the voice. They all looked up to see a giant floating head with two giant hands floating beside it.

“Are you the wizard?” asked a wild eyed Edmund. He couldn’t help but stare.

“I asked first, not fair,” respond the giant head. He frowned and turned away from the four travelers.

“No, don’t be mad! We seek your help!” shouted the young boy.

“Help with what?” asked the giant head with a raised eyebrow. Edmund pulled the math homework from his bag. He bashfully presented it to the giant head, his companions looked on curiously. “Ah yes, I’ve seen these markings before.” The giant head went into a period of deep concentration while staring at the fourth grade math problems. “Here you are,” said the giant head as one of his massive hands brought the piece of paper to the young boy.

“Thank you! So you are the wizard!”

“I sure am. Now get back to your mother so you can watch your shows,” said the wizard. He opened up a portal and motioned for the boy and his friends to enter in.

“Come on guys,” said Edmund with one foot already through the portal.

“Even you?” asked Edmund, his eyes locking with those of his stuffed bear. The bear ran towards Edmund and jumped into the portal before him. Once on the other side he could once again hear his mother knocking on the door to his room.

“I’ll open it for you!” said Edmund. He removed the pogo stick and opened the door for his mother. Before she could take a step he showed her the finished homework assignment.

“Hmm, fine. You can watch your shows,” she said, stepping aside so that Edmund and his stuffed bear could run down the stairs.