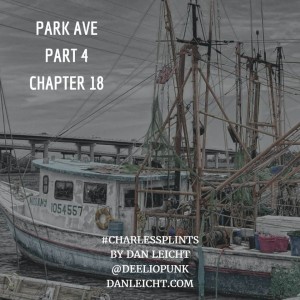 “Shall we go an get the real Glenn now?” said one of the doppelgängers. They both approached us as Splints was laying the man down on the bench. He pulled his flask from his pocket and removed his coat, placed it over the man’s face and upper torso.

“Let’s go see what Glenn’s up to,” said Splints before taking a sip.

“Good, yes. Let’s go see. He’s in that bait shed over there. He’s been waiting patiently for us,” said one of the Glenn clones.

“Oh yeah? I’ve never known him to be the patient type. He must’ve gotten that from you guys,” the sarcasm in Splints’ voice was lost on the two clones. I’d spent enough time with him to know most everything he said was laced in sarcasm.

Together we all walked to the small bait shed. The shed was quite small, but enough to fit maybe four people shoulder to shoulder inside. If Glenn were really in there he’d be quite claustrophobic. As we approached I wondered what the Glenns had planned once we reached the shed. Should I react and attack them both with Splints once we got there? Surely he could knock them both our without even needing my help, so the two of us together would be a wrecking crew to these two.

“He’s right inside there. Would you please open the door Mr. Splints?” asked one of the clones.

“I’d prefer if one of you opened it actually,” he replied. He was rotating both of his wrists, letting them crack.

One of the Glenns knelt down to the ground, looking as if going down to tie his shoe. The other continued to motion for Splints to open the door. It appeared as if their master plan was to lock him in the shed, but surely they had to know he’d manage to get out. The shed was in poor condition, the wood clearly rotting on the outside. A few fists into the molding walls and he’d be free in no time. The other Glenn stood back up, now holding a Gun he’d strapped to his ankle. Splints looked at the weapon and began to smile. The pistol wasn’t much to look at, but at such a close range it could certainly be used to take out the great detective.

“Get into the shed,” said the one holding the gun. The other motioned with his chin for us to do what his comrade was saying.

“Better do what the man with the deadly weapon has,” said Splints as he laughed and walked into the shed. Why he wasn’t fighting back I couldn’t figure out at the time. I followed him into the shed and closed the door behind us. It was cramped. He grabbed my shoulder and pushed me down, both of us crouched low on the ground. From outside we could hear the two clones talking. Then the first shot was fired into the shed, then another, and another. Each shot was too high to hit us as we crouched.

“How many more rounds does he have?” I asked.

“Depends how many he brought with him. Gun he’s holding should be out, but…” he listened to hear if it sounded like the gun was being reloaded. “Sounds more like they both left.”

“Why didn’t you fight them out there? He could have easily stopped both of them,” I asked as we both stood up.

“Figured they’d pull something like that. Get us both in here and unload the gun. I’d rather have them thinking we’re dead and report back to their friends with the good news. Gives us more time to figure this thing out. The real Glenn’s gone, that’s obvious. Now we have to figure out a way to ward off the rest of your friends, the ones up there in the sky.”