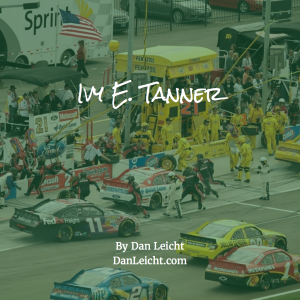 It was on the third lap, start of the race, and everyone in the stands could see the signs already. His car was swerving and grinding against the side wall as the other drivers passed him by. It was his big comeback race and the bleachers were filled with red and blue as kids, parents, grandparents all wore his colors. Chuck Tanner was a new man, or at least that’s what he lead everyone to believe at the press conference the day before, but it was clear the demon in the bottle hadn’t let go on him just yet.

Two weeks earlier he was still in rehab watching The Price Is Right next to a guy named Rain Davis. Davis told him how he used to be a big shot club owner, had the world by the balls until he sank himself into the gutter and ended up watching day time television at Morgan’s Monastery and Healing Center. The place used to be filled with monks, but that was years ago, now it was filled with addicts who could never guess right enough times to win the showcase. Tanner had told Davis that he wouldn’t be in much longer. He was right, since he left only a week later, and a week too soon.

As Tanner’s car sped down the track, grinding the wall, sparks flying in a blazing furry, he looked at the picture of his daughter on the dashboard and imagined her sitting next to him in the passenger seat. She was smiling and asking his expert opinion on her newest masterpiece, a crayon drawn illustration of the time a T-Rex fought our founding fathers. Tanner laughed and told her she was spot on and that it belonged in a history textbook. Then his car burst into flames and she disappeared.

Tanner’s car began to turn back into the lane just in time to cause a pile-up. Emergency personal rushed in and pulled everyone from their cars. Tanner was laid on a stretcher and rushed to a hospital. Dr. Phisman was the first person he saw when he woke up 8 months later. By then Tanner had a beard going going down the length of his neck, it was being sparsely maintained by his ex-wife Karen. She was a freelance journalist at the time and grabbed every job that came her way, meaning she spent her weekends staring at the screen of her laptop and the work week printing out the About pages for various businesses. She had a day job working as a secretary for a surgeon that only worked three days a week and made six times more money in a month than she did all year. Her mascara was running down her cheeks when she had come in to visit him after getting the call he’d finally woken up. She brought their daughter Ivy with her into the room and asked her to sit in the chair by the window while she made sure daddy was okay. Before she could say anything Dr. Phisman pulled her aside and spoke quietly for a few minutes as Ivy was looking out the window at the man walking up to couples asking for spare change.

Tanner was in and out of consousness but he could hear Karen’s voice. Their whispering was hard to make out even though they were only a few feet from his bed. The doctor was stressing to Karen that there could be possible brain damage, that he may not even remember her or their daughter. A smile cracked across his face when he heard him say Ivy’s name. Her picture was the last thing he remembered seeing before the crash.

“Ivy,” said Tanner as he slowly opened his eyes.