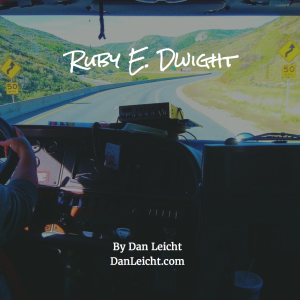 He’d been standing in the curb for about an hour before anyone stopped. He got into the passenger seat of a semi-truck and shook hands with the gracious driver. “Names Chuck Tanner,” said the driver. “Eddy Dwight,” he responded. Tanner took him across three state lines on his way to Cleveland, Ohio . On the way they talked about their lives and what got them each into the truck today. Tanner told him about his failed career as a Nascar driver, told him about how promising it all looked when he first started. His face was plastered on every magazine at the newsstand. Then it all just went away into the bottom of a bottle.

“So how’d you end up on the side of the road?” asked Tanner.

“Had to sell my car. My ex-wife Emily got full custody of our daughter Ruby. No visitation whatsoever. Her lawyers were better than mine, paid for by the alimony I was providing. I had nothing, no one to watch my back,” he replied while wiping tears from his eyes with his sweater sleeve.

“That’s a tough one for sure, buddy. I get my daughter ever other weekend. Went i’m not with her i’m on the road trying not to think about what life could’ve been. Sometimes a good drive is all you need.”

“It certainly helps to have a set of wheels,” Dwight responded while looking out the window. He nervously bit his bottom lip wondering if Tanner would ask for some gas money when it was all said and done. He only had a few thousand to go on from selling his car and he knew it’d have to last him a while as he looked for a new job and somewhere to stay other than a motel. “Do you know of any cheap places I could stay for a while in Cleveland? A motel that doesn’t cost a whole lot?”

“I sure do,” said Tanner with excitement in his voice. I’ll do you one better, we can share a room and split the cost. At least for tonight, i’m heading back out tomorrow morning. Same place has rooms for about fifty a night if you’re looking for a single. You’ll save around ten bucks if we share one until tomorrow.”

“Sure, that sounds nice. How long do you think until we get there?” asked Dwight.

“Half hour, give or take ten or twenty minutes.”

“Right.” Dwight rolled his eyes and smiled as he returned to the window. He thought about how Ruby would always put her fingers up against the window as they drove and pretend her hand was a person who could run at incredible speeds. Whenever they passed by a bench, or something else in the way of her imaginary path, she’d leap with her little fingers to dodge it and land gracefully back into a full on sprint. He began to do the same with his own fingers, Tanner even called him out on it, asking what in the hell he was doing. Dwight just shrugged and continued on, leaping over entire trees if he had to. With that ten or twenty extra minutes he wasn’t sure exaclty how long he’d have to run for, but he knew nothing was going to stop him now.