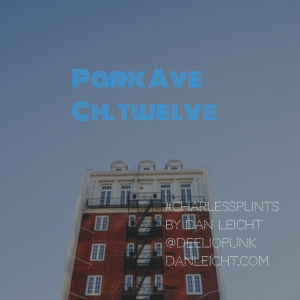 I began to tell him what I knew about the case. He had told me he was hoping to locate his friend Glenn Hardrow, but was sure the inevitable happened. I told him of the old woman I’d seen at the house on Park Ave, and how I saw the shapeshifter he struck with the chair no doubt eating the remains of the real old woman.

“That’s what I figured. This case just keeps getting worse,” he muttered as he paced around the room constantly rubbing his hands through his greasy hair. ”

“I felt so close with Glenn,” I said as I stood up from the chair.

“Glenn and I. We played chess in his room, I don’t think either of us knew the other was actually a shapeshifter.” I took another swig from the vial and noticed myself rubbing my hand through my hair just as he had.

“Hardrow was, is, a good man. We’ll find him. Not much of a talker that one.”

“Neither am I, so let’s get going.

I followed him back into the hallway and to the staircase. We could hear moans and cries coming from behind the doors leading to each floor we passed. He opened up the door to the ground floor and motioned for me to follow. We stayed low and quiet as we made our way for the exit. A few nurses crawled around on all fours at the far end of the hallway, one of which noticed us before we made it. She began to sprint towards us like an animal, her movements more like a bear than a cheetah, her eyes milky white, her skin loosely hanging almost as if wings.

“We’ve got company,” I shouted to him. There was something about him I didn’t understand, we were almost identical in every way except for his composure. I tried my best to hide my fear, but he seemed as if there were no such thing. As the nurse grew closer he stood up and rolled his shoulders back, cracked his neck. She was close enough to kiss his lips when he threw a balled fist into her gut and lifted her from the floor. She fell to the ground and began to change from one person to the next. She’d acquired so many people, I wondered how many she had devoured. The commotion caused the other nurse to come running. I readied myself to take her on as to make myself useful in the eyes of the real Charles Splints. He picked up the first nurse from the ground, now a supermarket cashier named Lou, and threw him over the reception desk.

The second nurse was growing closer, and not wasting her time in transforming into something more intimidating.

“Your turn,” he said as he patted my shoulder.

“Yeah, appreciate it,” I replied while taking steps forward.