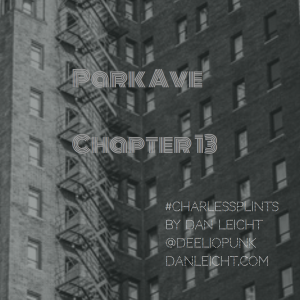 The second nurse had transformed into a mash up of everyone she’d consumed the blood off. Her arms and fists were those of a power lifter from a strong man competition, her legs lean like those of a sprinter, her stomach chiseled like a body builder, her face transformed into a mix of features as if a monster from a fairy tale. The disproportionate appendages made for a strange stagger to her movement and her body snapped wildly as it made adjustments. She could speak no true words, only a collection of snarls and hacking noises.

“She’s a pretty one. Remember she’s trying to kill you though, so best you get the wedding out of the way first,” said Splints as he motioned for me to deal with the approaching threat.

“I’m such an asshole sometimes,” I muttered to myself as I repeated the same gestures he had before taking on the first nurse.

“Huk, eeerrrr…haaaaaaaaaa,” she shouted like a battle cry and she leaped for her first attack on me. I was able to dive out of the way, slamming my right elbow into the tiles of the floor in the process. She quickly regained her composure and came after me again, this time darting from left to right, making her next attack more of a guessing game than the first. As she sprung towards me again I was able to land a fist into her abs before being pinned to the ground, my head hitting the tile just as my elbow had. I heard the tile crack, and the force on my head caused my eyes to roll backward. I closed my eyes, but could still hear her cries.

“Not cool, lady. That guy owes me money.” I could hear him while in my dazed state of mine. I could feel the wait from her leave me and the sound of her cries heading in another direction. She was running towards him. I had to get up, had to help him, but my body was in too much pain.

I was awakened by a kick to my side. I opened my eyes to see Splints with his hand out to help me up.

“Take a swig of the vial, just to be safe. Let’s get out of this place, nurses here are nothing like the movies.”

“How’d you?” I looked over to see the second nurse knocked unconscious. A broken broom handle was on the ground beside her.

Outside the sun was just beginning to rise, not high enough to make it over any of the buildings but just enough to give the world a sense of color through the man-made fog.

“Where do we start?” I asked. He had taken a flask from his coat pocket and was taking a sip.

“Would you believe me if I told you this was actually coffee?” He placed it back into his coat and crossed the street. I followed after him.

You can find more Charles Splints stories on Smashwords and Wattpad – also available on Amazon! Check out the Black Coffee Series to see Splints face off against competing gangs trying to take over the city.