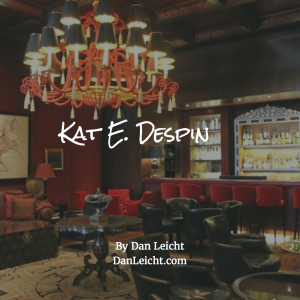 It was almost midnight when she finally showed up at the door. She’d forgotten her keys on the counter, but he’d been waiting at the kitchen table until she arrived to make sure she got in okay. Before she could knock again he was at the door holding her up and waving to whatever stranger drove her home this time. She cursed at him for treating her like a child as he helped her up the stairs and into the bathroom to brush her teeth.

She stared into the mirror and began to cry for the fifth night in a row. He went into their bedroom and turned on the fan that was aimed between them. The sound of the whirling plastic blades drowned out her sorrows, but that certainly wasn’t why he had turned it on. If the room wasn’t cool enough by the time she got out of the bathroom she’d threaten to leave the house again and head out to O’Hooligans for another two hours until the last call was served. She exited the bathroom with a smile on her face as she made her way to the right side of the bed. She crawled in on top of the sheets and within seconds was asleep, after a few minutes she was snoring loudly, which is something the sound of the fan helped with too.

He pulled the sheets back and got into his side of the bed and set the alarm for five in the morning. She’d wake up first with no memory of the night before, pop an aspirin, take a shower and head off to her office on the tenth floor of the Hardrow building downtown. She worked for Glenn Hardrow, a man who had found himself struggling to stay afloat in his early thirties until he struck luck with a lottery ticket and used the time it gave him to get his life back on track. He returned to school and got his business degree from a SUNY college and started from the bottom of the corporate ladder. Twenty years later he was seeing his name plastered on the side of a building in downtown Brooksend. He also hated it when anybody showed up late.

At five the alarm went off and she got out of bed. He rubbed his eyes and set the alarm again for six. He’d wake up and have the kitchen to himself and enough time to make a couple eggs and eat a quick bowl of cereal. He’d been eating gluten-free for the past four years and some of his favorite cereal brands were finally becoming gluten-free, so for the first time in years he was actually eating a half decent breakfast again before taking the twenty minute drive to work. During the drive he’d always listen to talk radio and listen to the host talk about family life as the co-host talked about how great the single life is. They’d insult each other using a high pitched voice that always made him laugh, before parking his car in the lot at the same job he’d been working at since he was in his early twenties.

Around five in the evening he finally got home from work after being stuck in traffic. He had kept switching between classic rock and 90’s top hits the entirety of the ride home. On the fridge he saw a note from his wife that she was at happy hour with a few friends. The note read –

He removed the note from the fridge and crumpled it up before putting it in the garbage under the sink. He made himself a quick dinner consisting of a couple chicken tenderloins wrapped in tin foil that were left in the fridge from the night before and a can of kidney beans. He watched a few episodes before deciding it best to just get some rest before he’d have to get up again and help Kat up the stairs and into bed. Around eleven the alarm went off and he went downstairs to make some tea, decaf, and wait for her to get home again. Around one he started to worry, by two he was in the car and driving around the city to all of her usual spots. No one had seen her all night and she wasn’t answering her phone. He called her friend Alyssa but she didn’t answer either, since it was two in the morning on a Wednesday and she was probably sleeping. He made it back home around four and found her asleep on the porch bench. He picked her up and brought her upstairs and into bed. At five the alarm went off and she quickly ran to the bathroom, popped an aspirin, took a shower and headed downstairs. His alarm went off at six and he texted his boss he’d be taking the day off.

That day he prepped a turkey and placed it in the oven a couple hours before she’d be home. He sautéed some vegetables and brewed some iced tea. On the table he placed her favorite flowers, white daises, into a vase alongside two lit candles. By the time the wax was dripping into pools on the sealed wooden tables and the candles were almost at their ends she knocked on the door. He let her in and brought her upstairs to bed. He’d already eaten his share of the turkey and packaged the rest up in the fridge. On the tupperware container he wrote a note. The note read –

for you to enjoy.

I hope you had