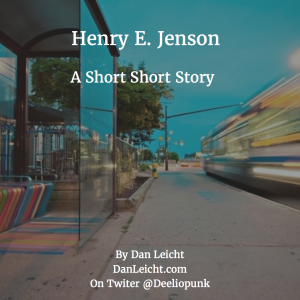 Every December he’d visit the bus stop in the morning and stay there until eight at night. Over the years he made friends with the regulars. Most of them referred to him as Old Hank and would bring him food and conversation before boarding the bus.

“Have too much leftovers from last night again, Old Hank. I hope you’re hungry,” said Sheila at least once a week. Hank would nod politely and place the tupperware on his lap. Others would offer him food and drinks as the day went on, assuming he spent the month here because he knew everyone would be in good spirits. Those waiting at the bus station wondered if he was homeless, though he looked well groomed in his white button-up and suspenders keeping up his tan slacks. His hair was thinning, but he had enough to gel down and kept it parted in the middle.

After years of waiting at the station someone finally asked him why.

“Old Hank, why is it you’re always waiting here? Don’t you have family or somewhere to be?”

“I do have family. She’ll be here soon.” He’d been waiting year after year for his beloved to return to him.

“My wife, oh you must meet her when she comes. She’s so lovely, I can’t wait to see her again.”

But, Old Hank, I’ve been seeing you here for the past few years. I even look forward to it now, but I’ve never seen anyone get off the bus to meet you. Why sit here all day in the cold?”

“She told me she’ll be home in time for dinner,” replied Hank followed by a bright smile.

“She’s on her way. I’m sure of it,” he replied without hesitation.

One day, his fourth winter waiting in the small snow covered shelter at the bus stop, the screech of the bus’s brakes woke Hank up from his nap. He opened his eyes and saw a woman walking down the metal steps as the doors creaked open. Her hair was gray, her clothes were expensive silk. She inspected the asphalt below her and winced before taking her first step down. Hank’s chest began to beat as he saw her.

“Grandma!” shouted a young boy as he ran towards the woman. Hank turned to look at the child, a look of confusion on his face. He turned back to look at the woman only to realize he didn’t recognize her. The woman patted the child on the head and walked towards his mother. Hank looked down at his worn out shoes. He lifted his big toe up on his right foot, poking his grey sock out the hole. For the first time in the years he’d been waiting tears began to well up in his eyes. Before he could bring his sleeve up to dry his face a hand was placed on his shoulder.

“Old Hank, I thought you might be here,” said Sheila. She walked around the bench and sat down beside him.

“It’s okay. I’ve got a place set at the table for you, how about you come home and enjoy a Christmas dinner with my family?”

“I would like that very much,” replied Hank with a bright smile.

As Hank sat in the passenger seat on his way to Sheila’s home he remembered the last time he saw his beloved.

“When will you return?” he asked.

“I’ll be home in time for Christmas dinner,” she replied before the doors to the bus closed behind her.